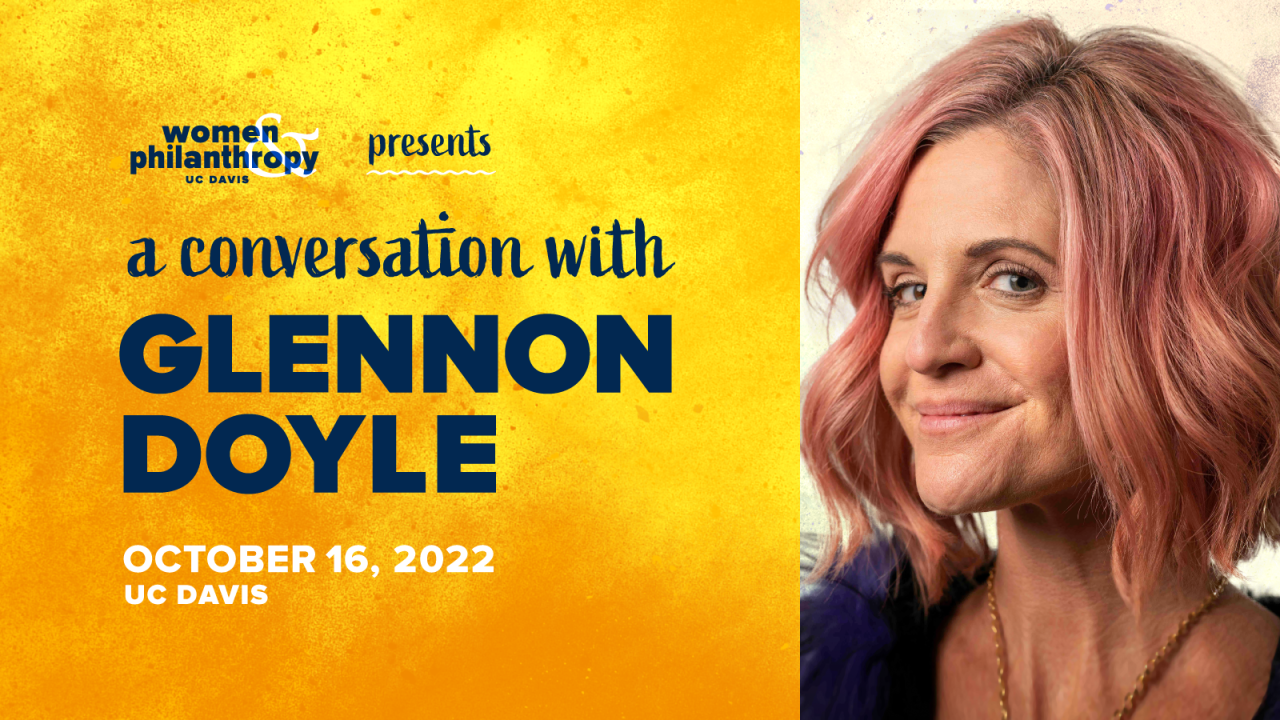 Glennon Doyle, activist and bestselling author of Untamed and other works, is coming to the Mondavi Center for the Performing Arts at the University of California, Davis, headlining a public symposium on women, philanthropy and leadership, 1 p.m. Sunday, Oct. 16. Tickets are on sale now.

Women & Philanthropy, which aims to ignite connections, nurture curiosity and generate contribution for good, will announce the winner of the organization’s inaugural Women & Philanthropy Impact Award.  The award, honoring a UC Davis faculty or staff member for contributions to the advancement of women, exemplary leadership, and significant impact on local and global university communities, comes with a $25,000 prize to be directed to the UC Davis fund of the winner’s choice.

Doyle, who strives to support and empower women to be themselves, has written two No. 1 New York Times bestsellers, Untamed and Love Warrior; hosts the We Can Do Hard Things podcast; and is the founder and president of Together Rising, an all-woman-led nonprofit organization that has revolutionized grassroots philanthropy — raising more than $40 million for women, families and children in crisis. The UC Davis School of Law is one of Together Rising’s beneficiaries.

Her other works include New York Times bestseller Carry On, Warrior and Get Untamed: The Journal. She shares personal stories illustrating the transformative power of women working together to make an impact.

The alumni panelists are:

Event moderator Pamela Wu is the director of Public Affairs and Marketing for UC Davis Health. Her career spans the fields of broadcast journalism, public relations and communications training. In 2021, she received an Emmy award in the category of health/medical long-form content. She continues her work in broadcasting as a substitute host for Capital Public Radio, Sacramento’s NPR station.

“We are building a community of women who want to contribute their time, talent, experience and financial gifts to help create a better world,” said Margaret Lapiz ’89, a founding member of the Women & Philanthropy Advisory Council and a member of the UC Davis Foundation Board. “Women & Philanthropy has the potential to be the most visible demonstration of how to grow an inclusive culture of philanthropy throughout UC Davis.”

Lapiz added that she is especially looking forward to honoring the winner of the Women & Philanthropy Impact Award.

“I see the impact award as a source of inspiration for us all,” she said. “With it, we’ll pave the way for future leaders and honor how others have paved the way for all of us.”